Skokie, IL, October 12, 2021 – Less than five years after buying a research park in Skokie for $77 million, American Landmark Properties has sold off a portion of the campus for almost the same amount.

A venture of Chicago-based Singerman Real Estate this month paid more than $75 million for the adjoining properties at 8025 and 8045 Lamon Ave. in Skokie, according to sources familiar with the sale.

The deal for the buildings, which total about 286,000 square feet, highlights Chicago's burgeoning reputation as a hub for startup and growth-stage pharmaceutical and biotechnology companies, and the rising value of properties that house them. The transaction also netted what appears to be a hefty return for the Skokie-based real estate firm that sold them.

The Lamon buildings are part of the nearly 23-acre Illinois Science & Technology Park that American Landmark Properties bought in January 2017 for $77 million. The campus along Niles Avenue and Searle Parkway in the northern suburb also includes a 178,246-square-foot office building that is fully leased to NorthShore University HealthSystem and is also on the market, with bids expected to be north of $40 million.

It's unclear how much American Landmark spent during its ownership tenure on capital improvements and leasing commissions at the properties it just sold, which combined are 81% leased. The firm, which couldn't be reached for comment on the sale, took out a $73.5 million loan on the property in 2017 and amended the mortgage to $78.5 million in 2019, Cook County property records show. Now, it has cashed out at a big number for just part of the campus as the COVID-19 pandemic funnels more venture capital into pharmaceutical and biotech research, a trend that has driven up investor appetite for high-quality lab space properties.

American Landmark is also close to completing an $18 million redevelopment of a 1970s-built, 135,000-square-foot office building at 8030 Lamon Ave. into more lab space, according to Jones Lang LaSalle, which oversees leasing on the campus.

The capital markets team in the Chicago office of JLL marketed the Lamon buildings on behalf of American Landmark.

Singerman's purchase is a noteworthy wager on the local life sciences scene by an investor that has owned lab buildings in major biotech markets like Boston and San Diego, but not in the Chicago area until now.

The Chicago area has a track record of watching locally born bioscience companies leave for more mature research markets like Boston, San Diego and the Research Triangle in North Carolina, mostly because of a lack of high-quality lab space for such companies to grow. But developers have landed financing to start building more of it in Chicago over the past two years, supplementing local hubs of research like the Illinois Science & Technology Park campus and helping send a message to life sciences companies that they don't have to defect to grow.

"There's a great vibrancy, a growth trajectory to the biotech and life science community in Chicagoland, which is anchored by world-class institutions and several market-leading, global pharmaceutical companies," said Seth Singerman, president and managing partner of his namesake real estate firm. "We think that fosters the growth of several early-stage companies, and we're excited about the prospect to support them."

Singerman confirmed the Skokie purchase, but declined to disclose the exact sale price.

Tenants in the buildings Singerman bought include clinical device maker Vetter and renewable ethanol manufacturer LanzaTech. The available space in the 8025 building was left behind by Fresenius Kabi as the drugmaker consolidated local operations into property it owns, as well as gene therapy-focused Northwestern spinout Exicure, which expanded and relocated early last year to a Lincoln Park building that Chicago developer Sterling Bay converted into lab space. 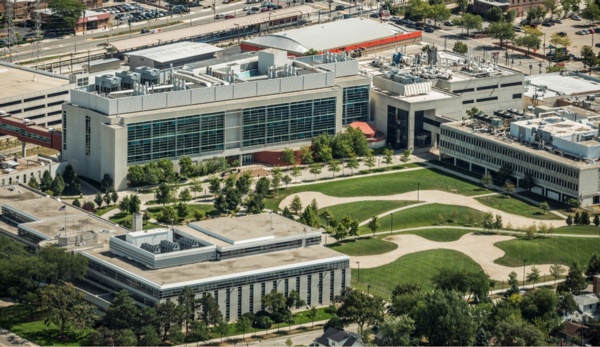